I have published my reportage about Turkey. If you want to know more about this country it's here 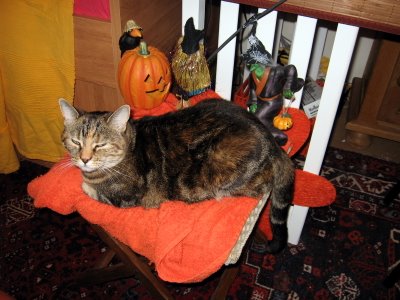 This morning looking at sleeping PC Pookie , I told her"I have nothing from you concerning Halloween" and as she didn't even open an eye I just put some Halloween stuff around her. But when I wanted to put a little witch head on her, she woke up and protested. Therefore PC Pookie has no Halloween costume. Kim her "sister" is dressed for Halloween the whole year, as she is a black cat.

I have my head full of Halloween stories, tales customs etc. It's the first time I realized what an important event it is especially for Americans. The other years I just found the decoration nice and also a nice custom so I bought some things myself without thinking more. Now by reading blogs I became curious and wanted to know the origin and a little more.

And that's what I found : Halloween originated among the Celts in Ireland, and Britain as the Pagan Celtic harvest festival called Samhain. Irish, Scots, and other immigrants brought versions of the traditions to North America in the 19th century.

The holiday was a day of religious festivities in various northern European Pagan traditions, until Pope Gregory III moved the old Christian feast of All Saints Day to November 1 to give Halloween a Christian interpretation. (The rest you can read yourself in Wikipedia here if you wish I have always known this day as being the All Saint's day and in Germany they used to put candles on the window sills to remember the death. As a child I have always been amazed by the lights on the sills.

In Belgium I learned another custom. Suddenly once a year people are remembering that they have deads in the family. So everybody runs on the 1st Nov to the cimetary armed with huge bundles of mums. You will find mums in almost every shop and on every market. Usually they only buy this for the cimetary. But there are also exceptions of course, me included, I like these big flower bundles and bought some for the patio and the house entrance, and of course on our animal grave under the wheeping willow tree.

Nobody knew about Halloween anymore until Hallowe'en celebrations in England became again popular when in the 1980s, American families living in London reintroduced Hallowe'en traditions such as pumpkin faces (and the US trick-or-treat) uncommon in Britain and Ireland.

And from there it probably came to us, as Brussels is the captal of Europe and many English and American families are living here. So yesterday I saw a mixture of all customs and that sometimes became funny. I saw people in the Supermarket buying 5 or 6 flowerpots with mums to be put on the graves and at the same time pumpkins and Halloween decoration.

In the only funeral store we have here in Waterloo, big mum bundles sat together with artistically decorated wreaths or flower arrangements. The only strange thing was that these were decorated with little pumpkins and even little Halloween figurines. I suppose the deads have nothing against celebrating Halloween. Until a few weeks I wouldn't even have noticed that. It is normal that you take the nicest things to the grave of a beloved person and as nobody knows what Halloween means everybody only find the colors nice and adapted to autumn. There is no bad intention involved by putting pagan and christian customs together. So you can see side by side some people holding to old christian traditions only going from cimetary to cimetary with their flowers, others are combining both, they also visit the graves and decorate with mums but have pumpkin decoration in the garden and house.

Or you even see disguised children with their parents and mums of course, in the cimetary. And people who go to mass (in Belgium 90 % of the population are catholics) would celebrate Halloween afterwards. I personally like to take over nice customs from other countries and apparently, other people do it as well. And so did the little neighbour's boy and decorated the front garden.

If you want to see the pictures of the Halloween party in Waterloo,

Hi Gattina,
Thanks for stopping in to visit me! I love new visitors!
This post was very interesting to read of the history of Halloween and the customs of your country. Halloween seems to have become a much more celebrated US holiday in the last ten years or so. I think it is because the stores are promoting it so much more!
I'll visit you again :-)

It's so interesting to hear about your celebrations in Belgium! I'm going to post a Halloween story tomorrow, so I'll try to come back and link then. (My Blogging Chicks story is about fall, rather than Halloween.)

Thanks for sharing your traditions and for stopping by my place:)
Feel free to stop in on Wed and share your holiday traditions.

That is very interesting!

As an American child (and even as an adult) I just took it for granted that we were the only ones to celebrate it (I think Canadians do too). I just thought EVERY"ONE celebrated it.

I have enjoyed reading about how the Halloween decor was used there.. as good a use as any.
You need to have an opportunity to taste a pumpkin milkshake and some of those odd things we do arounnd here. (do you like candy corn?)

very interesting post! so nice to see your pics too :)

As a catholic country, Spain observes the All Saints Day. Halloween is not celebrated like in the US, decorations are sold but kids do not go out trick or treating...nice post, enjoyed reading about the origins of it.

excellent... Halloween in Belgium, thanks for all the information Gattina, I was wondering all the same things myself. We do Halloween here in Australia, not so much as in America, and we don't often see the tricks or treaters, at least not in the area I live in.

Hello my sweet far away friend. Hon, I dunno about your comments on my site. All were published that came through. Blogger was messed up a lot over the weekend. Blogger must be male. :)

I can't wait to read about Turkey! PC Pookie didn't look very interested in Halloween. Wonder if her sister is excited about the holiday? In most parts of America, you can't adopt a black cat from an animal shelter during the couple of weeks surrounding Halloween. You can pick one out and the shelter will hold it for you, but you have to wait till after Halloween to take it home. I guess they're afraid some folks will use the black cats in rituals or something. Who knows?

Boooooy you had FUN decorating over here! Your blog is READY! Hope you get LOTS of trick or treaters here tonight! ;)

Huge hugs
Kit, and her cats; Nutty and Bosco.

Gattina
I love painting, writing, travelling and photography. My favorit models are cats which I observe with fun and humor. I am German, married to an Italian and we live in Waterloo (15 km from Brussels) / Belgium since many years. Waterloo is a famous place to many tourists, because Napoleon lost his battle here against Wellington and other European countries.